Scientific year 2016 was the one of the discovery of gravitational waves, announced on February 11, a hundred years after their prediction by Albert Einstein.

The event that gave birth 1,3 billion years ago to the gravitational waves observed on Earth in September 2015 (and announced in February 2016): the fusion of two black holes 30 times more massive than our Sun.

The Fund engaged heavily in explaining this historical discovery to the general public. But we want to support the large-scale experimental program that is being set up at the international level to develop the exploration of the gravitational Universe through its waves. The most ambitious program to date is the spatial mission LISA by the European Space Agency: this mission aims, on the horizon 2030, to set up at 60 millions kilometres from the Earth a gravitational antenna formed by three satellites, 2,5 million kilometres apart, exchanging laser beams. The tiny distortions in this gigantic triangle of light will signal the passing of gravitational waves. 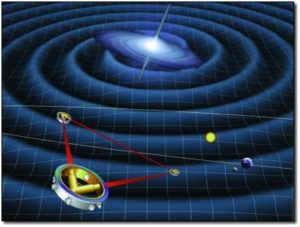 You can help us support this very ambitious program. Researchers associated with the Fund are very involved in the design and implementation of the mission. Fifteen years before the launch, any donation can contribute significantly to developing the expertise required by French researchers involved in the mission, both in the development of instruments and in the development of the highly sophisticated data analysis that will be needed for detecting gravitational waves sources.