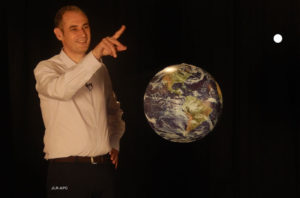 Pierre Binétruy passed away on the first day of April 2017. His family, relatives and friends are very touched by your many testimonies. As many of you have expressed the wish to contribute somehow to the continuation of his work, we have conceived the project to create a research grant bearing his name. If thus you wish to make a gift on behalf of Pierre, we suggest you participate in the creation of this research grant bearing his name. All donations received since  April 1st 2017 will fund this grant.

Donations to the Grant Pierre Binétruy can be made to the Endowment Fund Physique de l’Univers which he directed,

« It is a good omen for physics that prominent physicists are mostly also splendid people » Albert Einstein to Lorentz after meeting Niels Bohr.

« Pierre was one of the greatest scientists in the LISA community, an overwhelming driving force for the LISA mission, a key person in giving support to LISA Pathfinder, a hope and inspiration for the future, and a good friend. He leaves a hole that will be hard to fill.» Prof. Dr. Karsten Danzmann (Director, Albert-Einstein-Institut)

« Pierre was burning with excitement over the latest discoveries relating to gravity. I have rarely met such a pure and free spirit, an extraordinary dedicated scientist who was more than open to the arts.» Liliane Lijn (Artist and Poet)

« Pierre was a truly lovely man (…) and his contribution to us was done with care, attention and understanding to the level which has allowed us all to be grateful and more curious. He had what I have always told my grandson is the most important thing in life – kindness. Thank you so much for your kindness, Pierre.» John Manning (Gravity! learner)

« The way he put across the subject not only made learning easier but surprisingly, even though it was from videos, it felt like he was talking to me as a friend…» Richard Roberts (Gravity! learner)

«… Maybe his true achievement has been to draw in and enlighten so many others…» Patricia S. (Gravity! learner)

Some tributes to Pierre Binétruy: